I know I'm late with this post but I've been busy procrastinating didn't go to the movies that much this past month but I did manage to watch the following movies:

Absolutely enjoyed this film. It released a few days after I finished reading the book and I was beyond thrilled. I really enjoyed the casting. Tris and Four were perfectly cast. 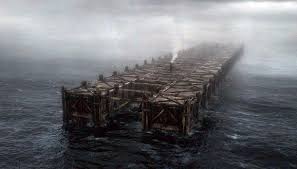 I grew up with the story about Noah and the Arc. I always thought about and at times, my family and I would discuss how it really went down compared to the cute storybooks. The practical questions were the ones that would stump my brother and I but we let it go.. The movie was, at times disturbing. Noah's thought process was horrific but the just of it was interesting and disturbing.

While this is by far no Oscar film, it was funny and full of Zac Efron Eye Candy moments. The storyline was predictable but totally worth it because it meant I got to watch Zac's baby blues that much longer. To be honest, I was hoping there would have been more development of the storyline of "That Awkward Moment" but alas, it was schemed over with a brief explanation of when a girl says..."So...."

This is the story of JFK's assassination and the alleged shooter. I must admit, I don't know much about the history of the JKF's assassination, it was very sad to watch.

What interesting movies have you watched recently?