I was planning a totally different post today and then I was running late so I thought I may as well skip posting but because one of my goals for the month is to post more ... Here I am.. Sitting on a plan and typing this post up off my blogger app (which is my way of apologizing for the terrible font and picture quality. 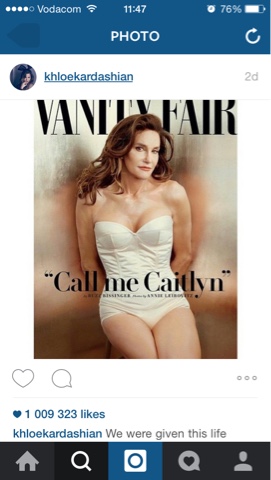 I just felt I couldn't ignore the thing that almost broke the Internet (and Kim K's naked body wasn't the reason for it) but rather who used to be her stepdad, Bruce Jenner.
To say I'm surprised by the timing is an understatement, Kim just announced her second pregnancy and then not long after Caitlyn is introduced to the world. I think that in itself is telling of what a big impact Caitlyn will have in the future.
If I'm honest, I wasn't a big fan of Bruce Jenner but I'm already liking Caitlyn.
I can't begin to imagine what Caitlyn felt like when she was Bruce and while I've seen many different responses and/or reactions to Caitlyn's introduction none have particularly shocked me because well... The more open minded and younger group of people will allow themselves to be open to the changes that people may go through and be more accepting of it while the older, more sheltered generations will be more sad, disgusted and scared of "what this world is coming to" .
Me? Not that you asked, but I'll tell you. I'm very happy for Caitlyn finally feeling like herself. I've watched over the last couple of months waiting to see how the transition will take place and how the very public family will react. While I know they have a lot of haters I can't help feel sorry for them. As open minded as anyone can be they have had to endure their dad no longer being their dad. Yes who Bruce was will translate into Caitlyn but there is just so much the transition will allow for. I feel bad for the boys because they always seemed to believe that Bruce was continuously emasculated by Kris (now we know why she could) and they saw him as their man's man. Caitlyn won't be that for them and for that I feel bad.
That being said, I hope that Caitlyn finds her happiness and that the world treats her better for who she is now and not who she was as Bruce.
What are your thoughts? I know you have some!!
Posted by Nats ~Coral Tinted Perceptions at 12:00

I agree with everything you said, but also feel like it is partially a publicity stunt. I say that because of all the magazines, shows/interviews, and the way that Bruce smirked in everyone of them. It didn't come across as genuine. Do I feel like Caitlin is a publicity stunt? No. Definitely not. But how she is going about everything feels very Kardashian.

I don't know how to verbalise my thoughts on Caitlyn. She's beautiful, thats for sure. And I sure to like that she actually broke the internet. I also like that now she's free to be who she wants to be.

But ... I feel for her kids. I know they say they are fine, but I just feel for them and even for Kris (who I don't even like) who was married to Bruce for 20 plus years and now has to accept that half her life was a lie. Sigh.