So I worked out that in 15 days I was in 6 different countries, 3 different continents, 12 towns.. Ok so Dubai was in transit and I live in South Africa but its still a lot of places to see!

The reason I wanted to do an in transit  post was that I found that in transit, especially when travelling alone, is the time you will really get to know where your head is at.

When I was on my way to Hamburg I had a 8h 45 min layover in the Dubai airport and while I could have opted for a one day visa my layover was from 00h00 till 08h45 and didn't really feel like I wanted to just pop into Dubai and then pop right out again. However, while sitting at Cosy at the airport, I had this pizza:

Which was  O-K ... I mean I won't be rushing back for it anytime soon but it wasn't terrible. But while sitting there I made a new friend... and I was so excited because it was exactly the type of things I looked forward to on my travels making new friends.

So meet, Ouma - she's a morrocan lady who was volunteering in Indonesia for a few months and then she got to holiday for a while in Bali! How amazing is that?! 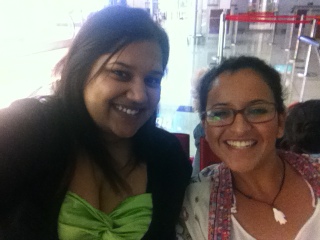 But the thing is, with our very long discussion, she was on a flight a hour before mine, we spoke about our different cultures, shared stories about our countries as well as travel experiences.

The funniest thing, was that throughout that whole time, we ended up talking about relationships and love and marriage a lot. I thought it was hilarious that two girls who got chatting would eventually end up discussing boys!

Either way, I am glad I met her at the airport, she made me feel more comfortable with the idea of me travelling alone and made me feel like although it is almost unheard of in South Africa, the world has a totally different view on travelling!

On my way back from Dubai, I was so excited to speak to other South Africans, it was crazy how talkative we are and I would say we are probably some of the friendliest people in the world - although the Irish might just beat us to the top.

I decided I will add a song for each post .. to set the tone I guess..

But coming back, although I do not have an official summer love to mention, it's the song that I thought of along with Daylight by Maroon 5.

I think it is the fact that each of these songs have an element (or more than an element) of love and having to leave it. I think that's how I felt.. how I feel, that I loved being away so much that leaving there was so difficult and returning home was trying to say the least...

Have you ever made new friends at the airport? Or do you have any songs that put you in the mood for adventure when travelling?
Posted by Nats ~Coral Tinted Perceptions at 15:30

This was such an awesome read, its always good to meet new friends when traveling solo. Love the travel songs that came with the post. If I go to the coast I am all about Jack Johnson and if it is to a "portuguese talking" place I have to start it off with Cesaria Evora.

I must be honest, I don't think I know either (Jack Johnson or Cesaria Evora) I will have to look them up!
Just like I enjoyed the Fairly Legal, I'm sure I'll enjoy these :)