The High Road Is Not For Me 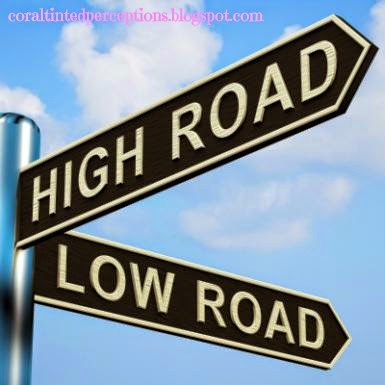 I’ve heard this saying for years and thought that would always be me. I pride myself on being a kind person but recently that limit was pushed.

I suppose I could blame it on the blistering heat wave that we’re in the middle off (you know, how could I keep a cool head in these temperatures?) or that it was that time of the month (that would just be a plain lie) or that I was just tired. Tired of being bullied and why shouldn’t I be? Why aren’t you?

Someone did something to me and instead of walking away from them (figuratively) I responded to their nasty emails with one of my own. I must be honest, it really wasn’t that nasty I just can’t seem to think of another term to contextualise either mails. You see, I could have handled nasty but underhand bullying is what really pisses me off and that’s what the mails were. I ignored the first but when the second came in I just couldn’t any longer.

A part of me wishes I regretted responding but the truth is I don’t. If anything I feel better for finally getting everything off my chest. As a trained attorney one of the things I have learnt is to mask rudeness in a mail with words which cut through the bull shit and still manage to make me seem very articulate. It’s an art… and it’s one of my favourite lawyering skills – to be able to be stern with not being overly rude or abrasive.

I digress. So the mails were forwarded to me and I responded one on one to this person and I let it rip because I was fed up and I knew that a lot of people would not appreciate what I was saying because you know.. “don’t go down to their level” but I also knew that no one but me was dealing with the effects of what those mails and that person’s past behaviour did to me.

Therefore in closing, I’m not sorry for unleashing years of anger hurt on that person because I hope that even if it’s just one line, that they think before the next time they want to treat someone as a second rate citizen.

I’ll see you guys and girls later this week! Do you always take the high road?

Thanks for stopping by! x

Unleashing an articulate shit storm is definitely an art haha. I try to take the high road but we are human and lets be honest it just doesnt always go that way!

I think you did the best thing Natalie. You spoke up for yourself. They also seemed persistent, so I'm glad you ripped them a new one. HaHaHa Bullying is so prevalent now. I'm nice on my blog, but I'll jump in your ass to no end if someone f*cks with me. One guy told someone, don't let that sweet face fool you. HAHAHAHA
http://www.averysweetblog.com/