Now isn't the title of this blog like the best thing you want to read on a Monday morning??? For all the GoT fans, if you're anything like me you'd be super excited however if you're not a fan you would think I'm cray! 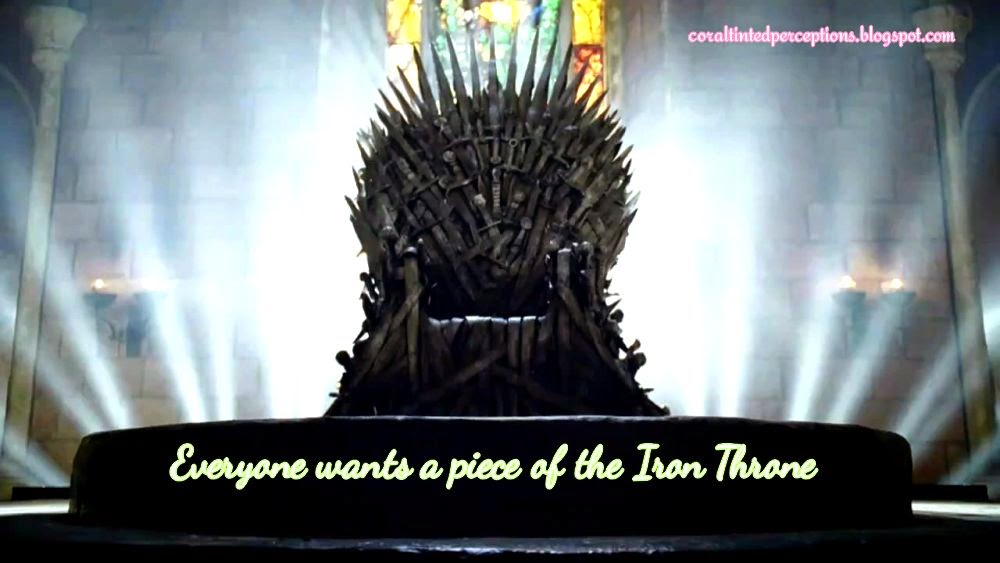 This morning I was struggling to find something to post about and while I have many different ideas none of them were just going to let me word vomit all over you. You see, today, I'm in a really good mood... the last few days have been rough and once again I'll be cryptic by not actually telling you why it's been rough because I'll probably do a "big" reveal next week.

What I will tell you is that I finally finished the first book in the GoT series and is it possible that I love it even more so than I did when I watched it? YES! I was nervous about reading the book and was afraid that I may realise that the writers of the show didn't do the book justice (yes, I know the author was part of the writing team) because sometimes things don't translate well onscreen like they would if you're in the mind of a character. That was not the case in this book.

What I will say is that the book provided enlightenment on the following:

1. Why Ned sends Jon to the Wall at such a young age.
2. Why Peter, Littlefinger, thinks he has a chance with Catelyn.
3. How Sansa thinks.
4. Why Jon stays at the Wall.
5. Where Arya got her name for her direwolf, Nymeria.
6. The Hound isn't as bad as I thought he was.

It also solidified these thoughts :

1. I hate Catelyn Stark, she may have her family's best interests at heart but she's a complete cow to Jon even though he is a child.
2. Jon is an incredible man, even at a boys age. He has such a beautiful nature and he's oh so valiant.
3. Cersei is a cow. I'm not even going to elaborate.
4. Joffrey is F$%#ed in his head
5. Dany is admirable and a strong leader, she really is destined for great things!
6. Sansa is too gullible.

Here is my review :

A Game of Thrones by George R.R. Martin
My rating: 5 of 5 stars

Brilliant writing which didn't surprise me because of how awesome the show is.... However the book allows you into the deeper thoughts of the characters which really excited me. I'm hooked on this series!

View all my reviews Are you addicted to GoT? Who's your favourite character? Jon Snow is mine but I took a quiz and it turned out that I'm Arya so if buzzfeed says I am, I must be!

Have a great week peeps

Email ThisBlogThis!Share to TwitterShare to FacebookShare to Pinterest
Labels: Book Review, Game of Thrones, goodreads, GoT

hey nat! i just started watching game of thrones and love it. only 4 episodes in to season 1, LOL but i'm steadily watching it. it's a fabulous show. i need to read the books also, but right now i'm just catching up.
http://www.averysweetblog.com/

I agree with you on all. I stopped midway book 3 I must start back I dont ever not complete a book! (weird sentence .. you get it haha)

I agree with you on all. I stopped midway book 3 I must start back I dont ever not complete a book! (weird sentence .. you get it haha)

I read the first book after watching the show and it just moved too slow for me since I already knew what was going to happen. Maybe I should give it another chance... glad you liked it though! I can't wait for season 5!!!!